The History of Alderney Library

When the people of Alderney returned home in 1945 following their compulsory evacuation to the U.K. and the German occupation of WWll, they found very few houses intact, little furniture and no books. Their first task was to rebuild the houses and establish a basic economy, but there was also a need for reading material to supplement the only existing source of culture and entertainment- the radio- for the Islanders were given no time to take their belongings with them when they left and, after 5 years of evacuation and war service, had nothing to bring back.

In 1949 a most opportune gift of 1500 books from a friend of Alderney in the U.S.A. together with a modest grant of £100 from the Island’s government enabled a group of volunteers to set up a free public library.

Since that moment, by 100% voluntary effort, the Alderney Library Group has maintained and developed a first class public Library; an extremely difficult task in the early years when the rebuilding of Alderney was the population’s principal task and, thereafter, as the rising cost of books has imposed an increasingly heavy burden on the fund raisers. Nevertheless the Library volunteers overcame these difficulties and for 52 years have run a free Library with Charity status, that is used constantly by Islanders and Visitors alike.

Over the past 50+ years the Library has moved through three ‘homes’. Each has been provided at a peppercorn rent but their occupation was inevitably time limited and the space incapable of enlargement. In 2003, as a result of vigorous fund-raising the Alderney Library moved into a purpose-built building paid for with money raised by the Library volunteers and built voluntarily by members of the community. The new building has facilities for the visually handicapped, access for the physically disabled, a Children’s Room and Reference/Reading areas- so that from the gift of 1500 books over 50 years ago and through the initiative and foresight of a dedicated group of volunteers the Island’s volunteer Library now has its own home, a home to house a Library of which the whole community is justly proud.

The Library is run by a volunteer committee of 10 members.

Please contact the Library and you will be referred to the appropriate member.

Further information is available at www.alderneybayeuxtapestry.com

The Queen’s Golden Jubilee Award for voluntary service by groups in the community was awarded to the Alderney Library on 2 June 2011 for providing library services to the community alongside fundraising for a permanent facility. 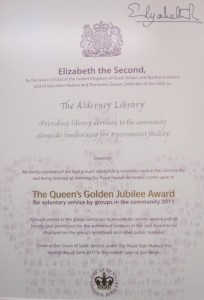 We are always looking for Volunteers to help out!

We welcome the donation of any unwanted books, which we will always endeavour to put on our shelves.

If you are looking for a book please phone on 01481 824178 and we can check we have it in stock. If we do not have the book we can consider ordering it.